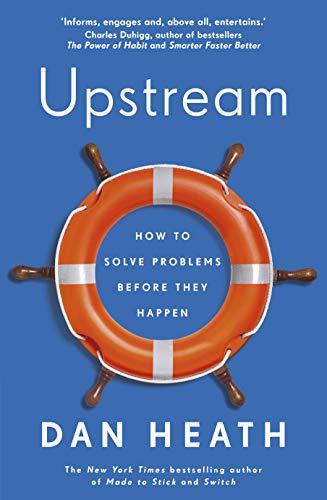 Dan Heath, first of all, provides an example of why, as he describes it, moving upstream is essential. By “upstream”, he means thinking about elements that cause problems in the first place and addressing them rather than reacting to the consequences.

In section one, Heath discusses three distinct causes of the problem-solving problem. Firstly, he talks about problem blindness. This blindness is the reality that we can be unaware of a problem until the damage arrives.

Secondly, he discusses the issue of a lack of ownership. Effectively, the reality is that most problems are “someone else’s”. Often the person most capable of solving the problem isn’t directly affected by it. Alternatively, they may have a vested interest in allowing the problem to exist in the first place, as it is their job to fix it when it arrives. Finally, he talks about tunnelling, the reality that when people are juggling many problems, they give up trying to solve them all and adopt tunnel vision. In that situation, there is no long-term planning, no prioritisation of issues, and we become constrained to the short-term to being reactive.

One theme in the book is society’s neglect of the “invisible hero.” The people who prevent problems aren’t recognised the same way as those who save the day. For example, a coastguard rescuing a drowning swimmer is an instant hero. But, at the same time, a swimming teacher who teaches children to swim – and thus helps to prevent accidents – is just someone who was doing their job.

Going upstream requires us to be proactive, think long-term, and find ways to change the outcomes that we are currently seeing each time, but once and for all. One example that I was surprised that Heath did not use was that of the aviation industry.

I think the record on aviation safety is extraordinary. It has demonstrated how, by thinking about the underlying causes of issues that lead to planes crashing, the industry has ensured that there is no repetition of a critical problem.

Although Heath does not use aviation as an example, his book is littered with relevant and detailed examples to describe the principles he is experiencing. Whilst they all have an American slant, they are provided with enough detail so that we can see the context and understand them in our situations too.

There are challenges that individuals have come up against when seeking to move upstream described throughout the book. One, in particular, stood out for me. In understanding how to address pre-diabetes, an early intervention plan was developed and tested with a randomised control trial. It was proven to save lives. However, the government analysed the proposition for cost-effectiveness. The longer lives resulting were too much of an additional cost to the state.

The cost-benefit argument fell because people who live longer cost more. Ultimately, this decision was reversed, but it highlighted how difficult it could be to attract investment to prevent problems rather than to accept the cost of dealing with the consequences of the problem. What Heath makes clear is that we all require an element of persistence if we are to make a difference in the future.

I think this book neatly encompasses an example of mastery. First, Heath has provided the context that enables us to learn quickly. Then, he shows us how to apply that knowledge and skill in our situations.

I enjoyed this well-researched and well-written book. I recommend it for all those involved in any way with strategy and long-term thinking for their businesses.