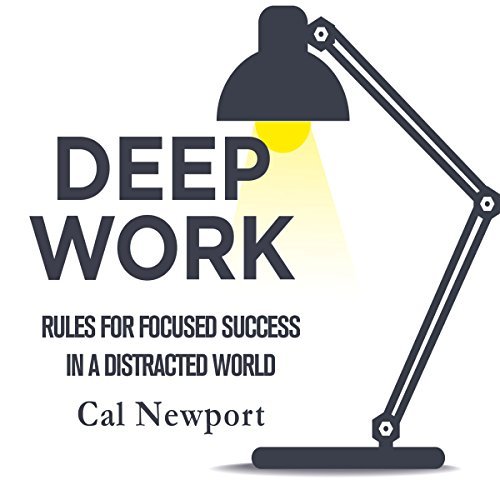 Deep Work is one of those books which is really talking about a seemingly single idea, and breaks it down into what proves to be some complex and interesting elements of neuroscience – why we get distracted. I thought it was very well structured, in its two parts.

The first three chapters are about what “deep work” is, and compares it to “shallow work”. Instinctively, I think we know what that means, but Newport’s definition is clear. Deep work for him is something that requires concentration in a way that is uninterrupted, to allow the mind and your thinking process to really work on the challenge. Shallow work, by comparison, is trivial. Many of us, however, spend most of our time doing shallow work. In reality, we’re constantly interrupted with distractions – we’re diverted by an email, we hear that phone ring, etc. Every one of those interruptions creates a distraction that takes us away from our ability to do something more meaningful. All of his examples are of people who have used the techniques, that he goes on to describe. As well as people like Einstein being included, he references ordinary people doing extraordinary things – people that take the time to have developed the ability to separate themselves from distractions.

I really like that the second part of the book is about the ways to achieve deep work. Newport went out of his way to make it very clear what he was talking about, why it’s important, and why it’s rare.

Deep Work talks about social media being deeply distracting, and about doing your utmost to take control of how it interrupts us – so, to use it, or avoid using it in a trivial way, at certain times of the day. I think we all know how disruptive it can be. That message all works for me.

His second chapter on how to do deep work is called Embrace Boredom. Really, what he’s saying is, with the technology and all the things around us today, we have trained ourselves out of the ability to be bored. If boredom strikes, we can always do something else – there’s plenty to do after all – we just don’t allow ourselves to be bored. We jump onto the next task. What he’s saying is that boredom is the gateway into the ability to have the time and the effort to think about things in the right way and to go deep. Rather than seeing it as a negative “Oh, I’m a bit bored”, we should reframe it to seeing it as “Oh, good. I’m bored. Now I can harness the energy of that boredom and turn it towards thinking”.

What I really liked was that he talked about “intentional meditation”. The principal way of learning meditation is to concentrate on your breath. However, the brain inevitably interrupts your concentration on the breath with a thought here and there about something else – like, have I fed the cat? The point of meditation training is to just acknowledge that thought, then let it pass, and go back to concentrating on the breathing. Newport’s intentional meditation states that rather than starting with an intention to concentrate on your breathing, instead focus on and ask: what’s the biggest issue that I face today? What’s the biggest challenge? Concentrate on that, and every time the brain says, “oh, have I fed the cat?”, you acknowledge the thought, let it go, and turn your mind back to thinking about the issue that you’re trying to think about.

I think it resonates, too, with some other books like “More Time To Think” by Nancy Klein, which was about working with a thinking partner to help you have the opportunity to think, without interruption, about a topic. I think that too is a technique that could help get into some of this deeper work.

The last thing I took from it was in talking about scheduling time, and in trying not to view any interruptions of that time as a complete failure. If you’ve intended to spend an hour or two in deep work not being interrupted, and something does interrupt you, just acknowledge it. Then think about how you can reschedule the rest of the day, to put some time in to do that. If not everything gets done… well, so be it. To help with that, turn off notifications on the computer, put the phone on silent, eliminate as many obvious sources of distraction as possible. The opportunity for avoiding interruptions won’t always be entirely successful – there are some things that will still come up – but basically, when I do this, the things that I thought would take me all day were done by lunchtime. That’s the nub of what Newport’s saying in the book – that when you get that deep work level of concentration, you can really motor.