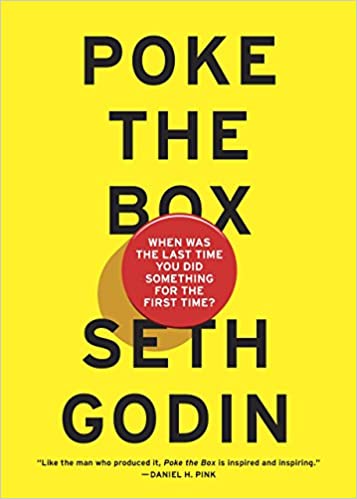 Poke the Box is described as a manifesto by its author, Seth Godin. A manifesto about “starting” by making commitments and making things happen. Much of the book focuses only on that one aspect of “starting”. For me, one of the most important elements of the book was very early on – in fact on page four – where Godin talks about seven imperatives.

The first being aware of the market and the opportunities, and who you are;

The second being educated and having the knowledge that you need to understand what is the value;

The third is to be connected, so that you can be trusted as you engage with others;

The fourth to be consistent, so that everybody knows what to expect;

The fifth is to build an asset, so that you have something to sell; and

The sixth is to be productive, so that you can be well priced.

Godin posits that the seventh is to start.

Godin’s point is that you can do all of the first six and still fail. He is right. Yet, if you don’t start you can’t achieve anything, it’s a truism.

When I work with businesses sometimes they don’t start, they are waiting – for things to be perfect, waiting for the opportunity to be clearer, waiting for demand for product to arrive. Sometimes we have to develop the product and then create the demand that it deserves. He goes on to talk about the importance of doing work that matters by making sure that what you do is not only important to you in particular, but to the world in general. He uses a number of stories to make the point clear.

In particular I was taken by his story of Ignat Semmelweis – a Hungarian physician, practising in the 1800s and advocating better hygiene by doctors. The point of this story is that sometimes what we start is not perceived by others to be the right thing. Others may try to ridicule you or stop you or change your direction. But if you are certain that you’re onto something, stick to it. It’s in that vein that Godin goes on to talk about how business people can be stuck in the way that things have always been done and be fearful of making changes that might upset that balance.

Another story he talks about are sports teams who consistently pick the best players. The end result is that those players not quite good enough to be on the ‘A team’ leave and join other teams. In the end, those teams “lose the bench” and when injuries occur they haven’t got the players to fill in. We look at premiership football today and the teams that consistently win, have, and keep a strong bench. I think there is a lesson for businesses in that story. A lesson that is easy to ignore, yet we miss it at our peril. Every business needs to be able to adapt as the world changes around it as we have seen in the last couple of years with the global pandemic. If we haven’t got a strong “bench” of the products that we can bring to the fore when the market shifts, or additional skills that we can bring to bear on our work, then it’s likely that an external change will cause a major business issue. So, if you haven’t got those things, start now and build them. Godin goes on to help think through some of the things that you might want to start, but on balance I think not very effectively. In the end, I was quite disappointed by this book which felt increasingly like a personal rant, and indeed Godin describes it as such. Whilst it didn’t provide great insight, it has the advantage of being quite short at 83 pages and can be read in an hour or so.

In all honesty it can be summarised in two words, “start something”. I’m not sure that’s good enough to be sufficient for a book. I do think Godin is onto something, but I’m just not convinced that his book does it justice.