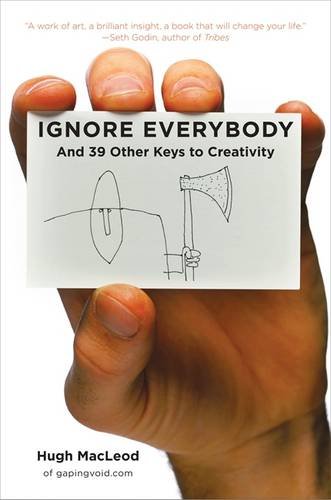 I started this book in imagining that it would be a useful and imaginative romp through creativity. Hugh MacLeod had started life as a copywriter and started doodling on the backs of business cards while sitting in a bar. These simple cartoons and the medium on which they were drawn gradually took a life of their own.

Communicating simple messages in a clear and concise way on a small piece of card MacLeod learned about his own creativity and ability to draw, he discovered an ability to communicate a simple idea and his pictures became his trademark. Over time, they were published in their own right, and he started to earn money from this work. He had not set out to do that. Over time, they created an income for him and he was able to give up working in a more traditional way.

In essence, this book is a story about not giving up. It’s a story about following the things that you do well and enjoy, regardless of whether they can, at the time you are enjoying them, make you a living. It’s a story that clarifies that it is only by honing a skill, by developing, and exploring it, that we can discover if our unique talent. In his case for drawing simple cartoons on the back of business cards, is of value to others. In many ways it’s a story of niching; niching to a skill. It’s about creating understanding, by doing.

Yet, underneath it all, I was disappointed by this book. I felt it failed to create a coherent narrative from cover to cover. Perhaps it was not intended to do that. For me, I felt it lost something from the rather disjointed nature of the chapters. Of course, I laughed at some of the cartoons and enjoyed the vignette stories. It has a simplicity that makes it easy to read, but did it make me ponder the nature of my creativity, and how to unlock more of that? Not for me. In the end, it was an interesting story about Hugh’s journey, the things that he had learned along the way, but it lacked the substance to give me insights I could use immediately to improve my own.

The book was, and felt like, a collection of blog posts, rather than something applicable to any business. Yet, all that said, I didn’t feel that I’d wasted my time reading this book. It was enjoyable, and it certainly created (there’s an irony in that) a sense of fun and enjoyment. I ended the book, feeling like I had an understanding of the author and his journey, which is valuable in its own way.

It was useful to read that he is adamant that if your plan depends on being “discovered” that it will probably fail. Things are made slowly and take time, and only at some point quite a long way down the line does it feel like they have suddenly gripped the world as a whole. MacLeod suggests not seeking to stand out from the crowd, but avoiding the crowd altogether. He makes the point that doing the same thing as hundreds or 1,000s of others means waiting for a miracle for you to be chosen. If you look for something that nobody else is doing then you will always be found when people are looking for that thing. That, of course, is hard. The one message I will take that will stick, I think, is his view of the sovereignty that we have over the work that we do, it is ours, we own it, and that we should make it truly ours, undeniably our own. We should make it so that nobody else could ever own it. After all, nobody else could now draw cartoons on the back of business cards in the way that Hugh McLeod does, and take away from his recognition and skill.

The book is quick read, and despite my minor disappointments the time to read it was well spent.